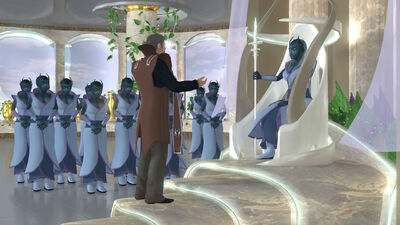 The Government section allows you to define your government type and empire
name. You may choose from three types: Representative, Feudal and Unified.

REPRESENTATIVE
This type of government is formed by elected representatives who work for the
interests of their people. It involves a parliamentary system where decisions are
made by majority.

FEUDAL
Powerful clans or families make up the governing body in this type of
government. While they are not elected, their popularity and strength in the
eyes of their people determine the length of their rule.

UNIFIED
When everyone works for the needs of the many, it forms a collective society.
This society is supervised by a unified body that makes up their government.
Individuals in such a society readily put the needs of the whole society before
their personal interests or advancement.

The Homeworld is where it all begins and these settings have a major impact on
your civilization.

SIZE
There are 4 generic sizes of planets between small, medium, large and huge. The
primary benefit of larger planets is the amount of population they can
accommodate.

RESOURCES
The amount of mineral resources impacts a world’s industrial capacity, which is
used to build starships as well as infrastructure to support the needs and
aspirations of the people. The three classifications are poor, rich and ultra-rich.

POPULATION GROWTH RATE
While resources and planet size are important you need a strong growth in
population to make use of the resources and to populate a planet. You can
choose between low, average or high settings.

Cultures, environment along with evolution develop the people of your world with
certain skills and abilities throughout the centuries. Here you can specify how by
choosing from three settings for each: poor, mediocre or good.

FARMING
Defines how much more food each farmer can produce. The planetary
environment further affects the amount of produce.

BUILDING
Defines how much more production each worker can produce. The planetary
resources as well as the environment further impact the amount of production.

TRADE
Defines how able a people are at finding buyers for the products they want to
sell.

RESEARCH
Defines the amount of research each scientist can produce.

SPACE COMBAT
Defines the ability of pilots at controlling ships in combat which helps both
offensively and defensively.

GROUND COMBAT
Defines the ability of soldiers to engage enemy troops on the ground.

Beside the generic racial modifiers, there are also special abilities that make races
different in more substantial ways. Here you can choose that ability.

CREATIVE
Creative races are not only better at seeing all the possible applications of
research but also more reckless when experimenting. Thus they get a bonus
toward the discovery of new technologies.

DEVIOUS Devious races are especially clever at influencing other races to get what they
want. They get a bonus at making trade or diplomatic deals.

RESOURCEFUL
Resourceful races are methodical beings who are apt at finding something where
others may overlook. This allows them a bonus in all research endeavors.

PARASITIC/SYMBIOTIC
These beings are feared and loathed by most other races. They live and feed off
of other sentient beings by taking their body as a host. This ability to take on
hosts grants them the power of immediate persuasion and even assimilation or
total control.

OMNISCIENT
Omniscient races have the special ability of recognizing certain events happening
to others of their kind from great distances. This ability isn’t a perfect
communication method but a form of connection that manifests and can be
beneficial at times of great distress or need.

TELEPATHIC
Telepathic races possess a unique gene which when developed allows their mind
to communicate, probe and even plant thoughts into other beings. As a result,
other races are weary or even fearful of them. Thankfully, only a small
percentage of any species endowed with this gift ever become powerful
telepaths.

TRANSIENT
Transient races are believed to have originated from another dimension. These
races have an innate understanding of temporal physics and can open time
corridors in the space-time vortex for their ships to travel through. This allows
them to ‘jump’ in relative safety from one point in the galaxy to another in a very
short time.

IMMATERIAL
There are beings in the galaxy that exist in non-corporeal forms. Some evolved
from primitive energy-based life forms while others, through evolution, have
shed their bodies -no longer needing them. Those of corporeal origin may still
appear in their old humanoid, or other body forms, as they have the ability to
shift between different forms of energy and matter. Immaterial beings are
extremely difficult to destroy and die VERY explosively, releasing their full energy
in all directions.

QUASI-IMMORTAL
There are rare races who are naturally born immortal or who have advanced to
become so. These beings have extremely robust health and are immune to
diseases and aging effects, such as the deterioration of body organs.

WARRIOR
These races have a culture that promotes the embodiment of the perfect
warrior. From childhood they are taught, trained to honor and live the life of
warriors. This makes them highly disciplined, yet at the same time, constantly
needing to prove themselves, making them easier to provoke.

FANATICAL
Fanatical races once devoted to a cause or idea become motivated with such
zeal that they tend to outperform all others. The negative side of this is that they
cannot stop themselves or be stopped easily when in such frenzy.

ECO-ADAPTIVE
Some races have the ability to subsist on harsh, inhospitable worlds. They have
organs that can adapt to most atmospheres and extreme temperatures. This is a
great advantage to space-faring races in a galaxy full of hostile planets.